With the Easter holidays fast approaching, we are planning on having hours of fun indoors and outdoors, instead of chomping on a tonne of sugar-rich chocolate eggs! This is thanks to Hasbro for sending us these amazing Nerf N-Strike Elite Rukkus ICS-8 blasters for my children to play to keep them busy! 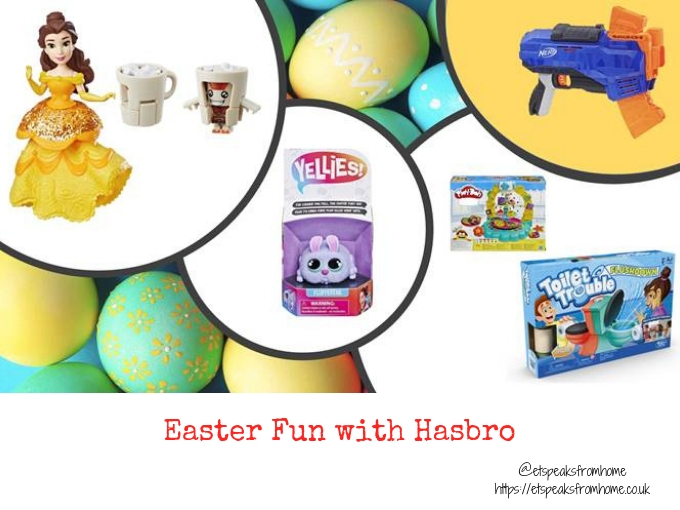 August is always the busiest time for entertaining the children and also not forgetting having to buy the back to school items like stationery, school uniforms and many more. Not long ago, I mentioned that Topps had launched their latest collection, the Disney Princess Trading Card Game, which includes live-action movie stills from the Beauty and the Beast film! Have you read about it yet? To celebrate the recent release of Moana on DVD, we received a fabulous package from Jakks Pacific. We need to host a night in! Disney Moana is a 2016 American 3D computer-animated musical fantasy comedy adventure film produced by Walt Disney Animation Studios and it was released in December 2016. We had already watched it at the cinema with Ms C and she loved it. It is not very often we get invited to such an awesome place as Disneyland Paris and to meet Disney Ambassadors Paula Radcliffe MBE and Paralympic winner, Michäel Jérémiasz from France at runDisney France! If you have not seen my earlier posts about the event, do check out my post about it. Recently, Topps have launched their latest collection, the Disney Princess Trading Card Game, which includes live-action movie stills from the Beauty and the Beast film! We went to watch Beauty and the Beast the day it came out and we all loved this enchanting story. It’s nice they kept pretty close to the original animated movie and Ms C is a big fan of Disney Princesses! This coming Thursday 21st April is a celebration of the National Tea Party. Will you come to our Royal tea party and join us? We have invited Princess Sofia, Princess Ariel, Princess Belle and Princess Cinderella using this gorgeous Sofia The First tea set.

These 14 inch Princesses are all dressed up in their stunning ballroom dresses with matching tiaras to come to join us. What’s so special about them are their Royal Reflection ™ eyes which shine and shimmer! Ms C is delighted to have them all come to her tea party. I See the Light! This Hair Glow Rapunzel doll brings the magic of the hit movie Disney Tangled to life. When you brush her hair, it will begin to magically glow as she sings. This is a very well made and nice sized doll (roughly 34 cm tall) that will be adored by many children! This is suitable for aged 3 onwards. Ms C is a massive fan of Disney Princesses and owns a huge range of princess costumes and Disney figurines. Having seven Disney Princesses on her wall and being able to sleep next to them would definitely make for one very happy little princess!

Nuffnang partnering with British homeware brand 1Wall offered us an exclusive product review. The founders of 1Wall was bored with plain traditional wallpaper and they decided to set about creating original and elegant wallpaper murals to help you style any room of your home. They are based in Blackpool. The company has had amazing growth and now holds numerous product licences, including those for Where’s Wally, Moto GP, One Direction, DreamWorks and Manchester United. Thanks to them for this fantastic chance to review it.

Ms C is no stranger to Palace Pets as we had reviewed their Palace Pets and salon range. She still loves to play with these as well as the app (free to download) and so for us, they pass the longevity test. Each Disney princess has their own adorable Palace Pets friends to play with. Each of the animal’s friends have a resemblance to their respective master, whether it is in their look or in their accessories. The app allows children to pamper their virtual pets in the magical app.

Palace Pets are suitable from aged 4 onwards and the range includes:

Recently, Dulux have teamed up with Walltastic to bring you the Bedroom-in-a-box. There are 5 different themes available: Fairy Princess, Avengers Assemble, Jungle Adventure, Peppa Pig and Sea Adventure.

This enchanting Disney masterpiece, Sleeping Beauty, has comes to Blu-Ray™, Digital Download and DVD from 2nd June 2014. With Maleficent, a new studio film about the ultimate villain starring Angelina Jolie currently in cinemas now, there has never been a better time to revisit this must-have classic.

Sleeping Beauty was Disney’s 16th animated classic and was initially released in 1959 and it took nearly a decade to produce. This magical and timeless story begins with the birth of Princess Aurora, the precious daughter of King Stefan and his wife. To celebrate the arrival of the Princess, three good fairies – Flora, Fauna & Merryweather bestow gifts of magic on Aurora, but an evil sorceress named Maleficent places a curse upon the little Princess – that she will die on her 16th birthday after touching the poisoned spindle of a spinning wheel. Merryweather tries to undo the damage by casting a spell that will allow the Princess to awake from an ageless sleep with a kiss from her one true love.

A year ago, I raised a question with UK beauty bloggers if they knew anything about nail polish for children but didn’t get anywhere.  Ms C is a big fan of nail polish.  I had bought her a few adult nail polishes while we were out shopping.  With the various chemicals in nail polish, I always worry that she might accidentally ingest it or that it would harm her tiny nails.  Long term use of nail polish will dull the colour of the nail if you don’t look after it properly.  Therefore, I am so glad to come across Markwins on Twitter.

Markwins have been expertly designing cosmetic and beauty collections for over 25 years based on three simple concepts – Quality, Value and Innovation.  They offer fabulous value, innovative packaging, inspiring concepts and affordable beauty products to women and girls around the world, without sacrificing quality.