Baffled is a brand new memory game from Cheatwell Games. This board game might look simple but it is not! It is a very challenging and fun memory game that should appeal to all the family. It is cleverly designed so that children and adults have an equal chance of winning. You only have 60 seconds to memorise all the position of the twelve symbol tiles but be prepared – the tiles can swap and change positions around the board! It is suitable for aged eight and above, for two to four players. 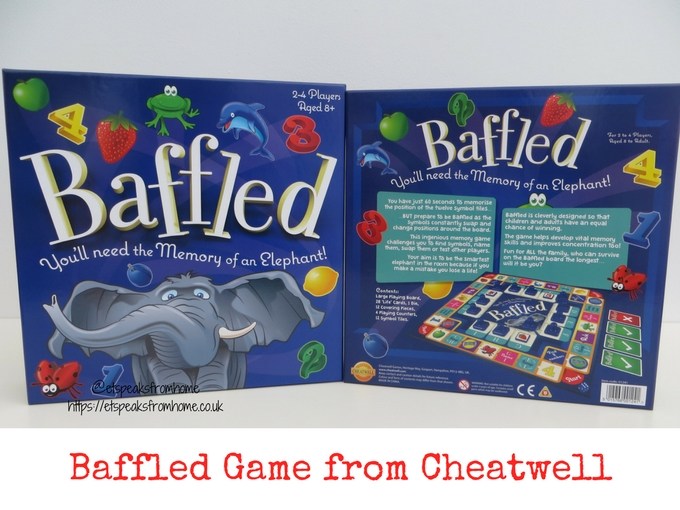 Did you join us on Thursday for the fun-filled Rusty Rivets Twitter Party with ukmumstv? We had so much fun doing all the activities and of course watching an episode of Rusty Rivets!

Rusty Rivets is an animated television series currently airing daily at 5.30pm on Nick Jr. It follows the adventures of a young inventor named Rusty and his team of customized robots. Rusty uses his knowledge of engineering to repurpose machine parts and create gadgets. He lives in the city of Sparkton Hills along with his Hispanic-American friend Ruby, a robotic tyrannosaurid named Botasaur, and a group of smaller robots known as the Bits. The show highlights a variety of concepts related to basic science and technology. Did you know that Orchard Toys have just released an updated version of Shopping List and its additional extras packs? This classic game has topped their sales list for over ten years and is their best-selling game of all time. The Gruffalo is a story about a mouse who goes on an adventurous journey through the deep, dark woods and is confronted by Fox, Owl and Snake who all want to eat him. To save himself, he makes up a story about an imaginary Gruffalo to scare them off. It is a well-written book for children with rhyming text by Julia Donaldson and fantastic illustrations by Axel Scheffler bringing the story to life.

Dobble is a fast and furious family card game for 2 – 8 players aged 6 and above that can be played by anyone, regardless of age and interests. It consists of 55 cards, with 8 symbols per card. The cards are thin and easy to hold. The symbols come in varies sizes which make it quite hard to spot sometimes, especially the smaller ones, which makes this game so interesting! The symbols are very cute and bright.

Memory games are great games for children to play. It improves observational skills and helps to train your brain to use and grow your ability to remember.
Cartamundi is the largest global manufacturer and market leader in playing cards and cards for games. They kindly sent us a pack of Visualise Junior for review. It is suitable for 8 years and above for 2 to 6 players.

Brainbox Games My First Sound Snap is a unique deck of cards that lets you play two family favourites, Snap and Pairs using early-years reading strategies. It is suitable for aged 4+ and comes in 52 full colour playing cards plus 3 rules cards.

We have previously reviewed BrainBox My First Picture and we really loved it. It is simple yet fun to play and exercises those little brain cells!

Both of my children love to play games together from board games to computer games. As they are only 18 months apart, we are fortunate that it is quite easy to find a game they can both play and enjoy.