Ferdinand, the most love-a-bull family animation of the year, cattle-pults its way to Digital Download on 10th April and 4K Ultra HD™, Blu-ray™ & DVD on 16th April available from good DVD retailers and online. 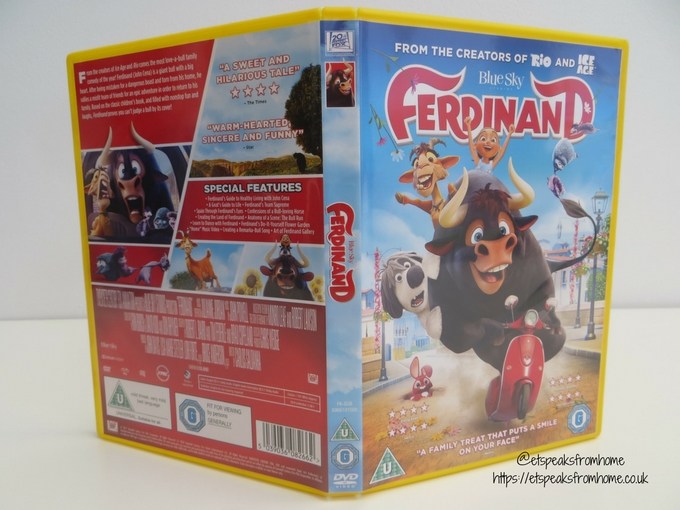 This film is inspired by the beloved book “The Story of Ferdinand”. It tells the story of a giant bull, Ferdinand, with a bigger heart voiced by John Cena (Trainwreck, Daddy’s Home). After being mistaken for a dangerous beast, he is captured and torn from his home. Determined to return to his family, he rallies together a misfit team for the ultimate adventure and proves you can’t judge a bull by its cover.

We were so lucky to receive the DVD before the release date. It was a great way to spend Easter half term watching a film as a family together! It is definitely a film you won’t want to miss! We had so much laughter and fun watching it! I love the jokes from various characters and their dancing moves! My daughter’s favourite part is when Ferdinand tries to escape with the help of his friends, the three lovely hedgehogs, Una, Dos and Cuatro! Even my 10 year old son enjoyed it despite his initial hesitation as he thought it would be too childish for him! It is indeed a lovely heart-warming film that shows the other side of a bull’s life. I would recommend it!

Here are the links to get it from Amazon on 16th April:

This DVD also comes with the following special features:

Do check it out!

Disclosure: We received the sample for the purposes of writing this review, however, all thoughts and opinions remain our own. Contains Amazon affiliate links.